Sarah Ronan, on Converting to Islam

Even though Sarah grew up in a Christian household, she drifted away from religion when she was 17 years old. After years of partying and doing her thing, she started looking for a deeper meaning at age 28. She researched multiple religions and discovered that merely picking and choosing her favorite elements of a religion is not an option. Just when she was looking into Islam, she met the man who would become her husband. He came from Egypt and was a non-practicing Muslim.

It soon became clear to Sarah that she would convert to Islam. She found a sense of peace and dignity, as well as a loving community that changed her life. She started wearing the hijab and went to University. She used her degrees to work as a teacher at Islamic schools. She found everything she was ever looking for.

However, being a Muslim in America wasn’t always easy, especially after September 11th. Even though Sarah never felt seriously threatened, she decided to stay at home for a few days after the attacks. Listen to her interview to find out more about her experiences, her insights and her decision to wear the hijab.

Sarah Ronan is a 49-year-old American who raised four children while completing two university degrees, including a Master’s in Education. She has used this degree to travel the world and teach abroad. She is currently an elementary librarian at the largest Islamic school in the south, which is located in the suburbs of Dallas, Texas. 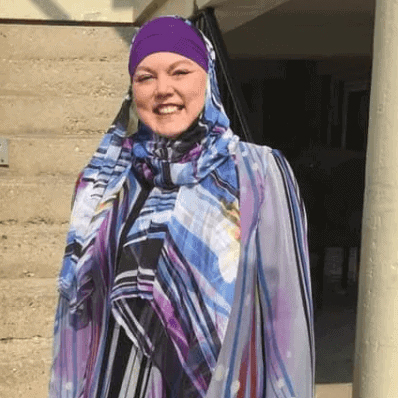